“one of the most unique post-apocalyptic movies of all time.”

Check out the film if you have not seen it. On Amazon and Vimeo on Demand. Directed by Barry Hunt
Screenplay by Jeb Pearson, based on a play by Tania Myren

Watch it on Vimeo here 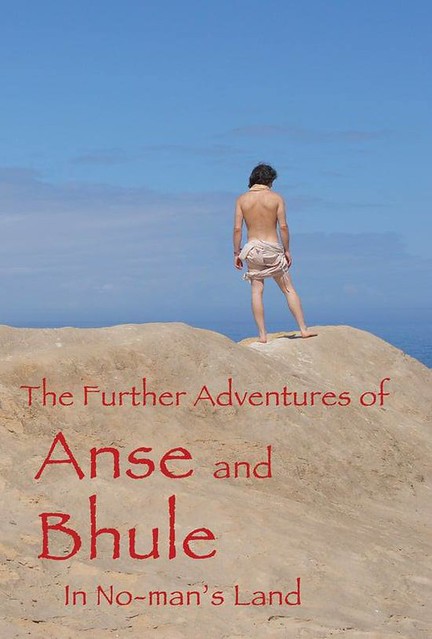 When it comes to post-apocalyptic cinema, I’d imagine that most people think of stuff like the Mad Max movies or one of those awesome low budget 1980’s Italian movies that were video store staples back in the day, like 2019: After the Fall of New York or Warrior of the Lost World. After watching The Further Adventures of Anse and Bhule in No-man’s Land, directed by Barry Hunt, your perception of post-apocalyptic cinema will grow to include one of the most unique post-apocalyptic movies of all time.

Adapted from a stage play by Tania Myren, Anse and Bhule stars Garfield Wedderburn and Dan Hill as Anse and Bhule, members of a group of all male apocalypse survivors who have managed to create their own culture in the aftermath of the end of the world. The men have their own language (part words you’ll recognize, part words they’ve made up) and their own set of rules to live by. Mainly, the brothers work and support one another, and they go around and kill people they find who are suffering from, I suspect, radiation poisoning. It’s how the brothers plan on purifying the world and keeping one another safe. It’s a way of life that works until, one day, Anse and Bhule come across Persephone (Kelly Tallent), an apocalypse survivor trying to care for her sick mother Margarette (Lorraine Bahr). While interacting with Persephone, Bhule realizes that there’s more to the world than the society created by the brothers and suddenly the idea of destroying the infected for the betterment of the world doesn’t seem like such a keen idea. Anse tries to keep Bhule on the straight and narrow, but the pull of Persephone and another way of thinking may be too much.

What’s absolutely fascinating about Anse and Buhle is that, up until about the halfway point, you don’t really know what the movie is really about. We meet Anse and Bhule and the other brothers, we see them in flashbacks as children surviving the immediate aftermath of the apocalypse, and then we see them in action in their present life. We find out about sandstorms (they happen quite often), we find out about the rituals the brothers use when taking out “abominations for the sake of the world” (masks on the back of their heads, clubbing blows to the head of the victim, and blood removal. It’s all pretty nasty), and the language the brothers use. Listening to the actors use that language, how they commit to it and make it sound as natural as any “real” language, it’s amazing the level of commitment they have to the idea. The version I saw had subtitles, but it might be cool to see it without them, at least the first time, just to see if it makes sense without them. I bet it does, but you won’t know until you try it. I wish I had tried it.

The world Persephone exists in before she meets Anse and Bhule is probably more relatable than the brothers and their world, mostly because it’s similar to what we’ve seen in other post-apocalypse movies. Persephone and her family live underground, in a collective that is fine with living away from everyone and everything that still lives above ground. And you get the feeling that, when Persephone’s family runs into another group of people, it makes itself as scarce as possible. Interacting with other people in this world is a bad idea because it’s likely going to lead to sudden death. If you’re not alive you can’t survive.

When the two worlds meet it really is a shock to the system for both the characters and the audience. Up until that point we’ve seen Anse and Bhule eliminate “abominations” without arguing over what to do and how to do it. Once Persephone is brought into the equation, the world isn’t as cut and dry as it once was. As for Persephone, she can’t find a way to escape Anse and Bhule and get Margarette away from harm. She has to find a way to get out of the situation herself. At first, they were going to kill her, too, because they assumed she was an abomination. They seem to be the only people they ever meet outside of their brotherhood. But she isn’t afflicted with the radiation sickness. She’s something else. So they can’t kill her, at least Bhule doesn’t think so.

The movie begins with children in an orphanage getting to know one another right before something explodes outside, causing pieces of the roof to fall away. It’s an interesting way to show how civilization ends for the kids, as the orphanage is the only world they know, and now that’s all caving in and falling away. It’s the equivalent of watching a nuclear bomb destroy a city. It’s also an innovative way to show the end of the world on a small budget. If you can’t level a building, show pieces of the ceiling falling while the camera shakes. It ends up feeling like the same thing.

Anse and Buhle looks amazing. The locations used make the movie look much more expensive than it actually is. You also get a better sense of the devastation inflicted on the world as Anse and Bhule walk in the “desert” and deal with sandstorms. Despite the story being relatively small there’s a real sense that everything we’re watching is just a piece of a much larger world. If the brothers exist alongside Persephone’s family, it makes you wonder who else is out there. Abominations abound, sure, but where do they come from? Are they all just random survivors who somehow figured out how to live for years before getting sick or are they part of communities that we haven’t seen because they’re hiding like everyone else? Perhaps that’s something a sequel can explore if one ever happens. That would seem to be the promise of the movie’s final image. 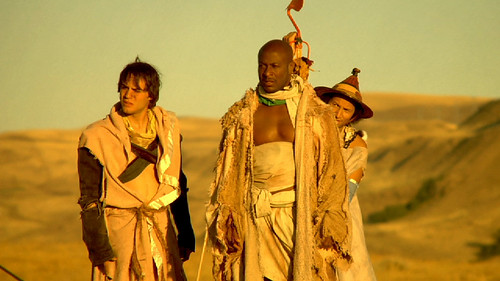 The three main performances are as top notch as you can get. Garfield Wedderburn is superb as Anse, the brotherhood leader who tries to keep his society together. He’s a good natured older brother at times, and a kind of disciplinarian at other times. Wedderburn has the kind of natural screen charisma to easily inhabit both of those ideas. There are times where he seems a little too devoted to the brotherhood cause, but then it’s what’s allowed him and his brothers to survive for as long as they have. You can’t blame him for being as devoted as he is.

Dan Hill does a great job making Bhule a kind of innocent in this world. He only knows what he’s been told and what he’s experienced. When he’s confronted with the idea of Persephone his entire world changes. It’s a great way to show someone sort of expanding his or her horizons.

And Kelly Tallent is awesome as Persephone. It’s fun watching how she reacts to her world changing. And, as I said before, her character is likely the one the audience is going to relate to the most because we likely understand her more than anyone else. She’s also the only one not speaking that made up language, so right there she’s more like us than Anse and Bhule.

The Further Adventures of Anse and Bhule in No-man’s Land is a different kind of post-apocalypse movie. It isn’t what you expect it to be. And that’s why I think you need to see it. It’s a unique movie watching experience. You will likely never see anything else quite like it. It looks amazing, it has terrific performances, and it will stick you with for a long time after watching it. If you’re in the mood for something different, something beyond what you expect, give Anse and Bhule a shot. It will change the way you think of the end of the world.

So what do we have here?

Explosions: Yes, although we only see the aftermath of the explosions.

Doobage: Orphanage hooey, a suitcase filled with stuff, a bottle of Jack Daniels, an off-screen explosion, falling ceiling pieces, smoking wreckage, young men fucking around, book burning, a sort of nightmare montage, finger pushing into a gaping wound, talk of sandstorms, multiple flashbacks, a song called “Give me that thing,” cutting open a dead body, bones of dead animals, a bracelet made of crayons, a sandstorm, brief side boob, “eight rules” stuff, barfing, club to the back of the head, mild bondage, ants on the ground, hammer sharpening, another sandstorm, chemistry talk, wrist slitting, full frontal male nudity, a booze flask, a weird dream that seems to feature nude men on rocks for some reason, and the ocean.

Kim Richards?: Implied, based on the subject matter, all off-screen.

Gratuitous: People singing “Happy Birthday” in multiple languages, people singing “You are my sunshine,” talk of “See Spot Run,” sand in the eyes, knowledge of “Superman,” and the ocean.

The Further Adventures of Anse and Bhule in No-man’s Land is one of the most unique post-apocalyptic movies you’re likely to see. It isn’t what you expect it to be, considering the subject matter, and that’s where its power lies. It’s something you have to see. And when you do see it, the idea of post-apocalyptic cinema will expand. Great stuff from director Barry Hunt. It’s a little weird, yes, but give it a chance. I think you’ll like it.

Should you ever have a question, please dont hesitate to send a message or reach out on our social media.
MORE VIDEO